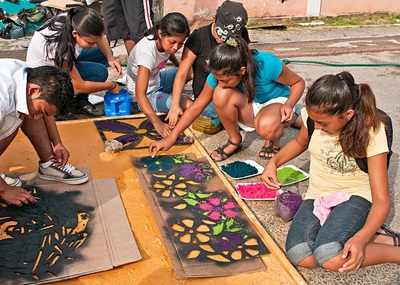 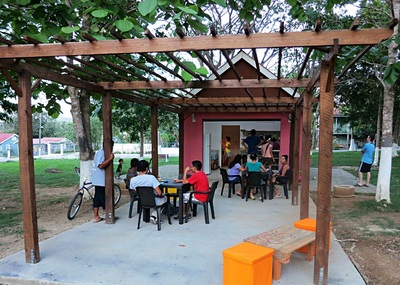 “a small town with a surprisingly sophisticated cultural scene”
- lonely planet Belize 2011-
Benque Viejo del Carmen (Benque) is the westernmost town in Belize with Mestizo and Maya culture. This town is located just one mile form the Belize-Guatemala border and approximately 81 miles from Belize City.

The history of Benque as vibrant as its people and its cultural heritage, dates back to the ancient Maya, to the British logwood cutters of the early 1600’s and the chicle Industry of the 1900’s.

Over many decades, with the arrival of different people, a fusion of cultures gradually emerged, but even today, experiencing the rustic natural charms of Benque Viejo and the friendliness of its people, takes you back in time.

Today, the inhabitants of Benque Viejo are mostly Spanish speaking Mestizos, the descendants of Maya from Peten, Guatemala, and of Mestizo and Maya from Yucatan, Mexico.  Approximately, 8,000 people live peacefully in this historic town.

As with most of Belize, history shows that the Maya have been occupying Benque for more than 2,000 years. After the Maya, in the early 17th century, British settlers arrived in the country attracted to the abundance of hard woods in Belize’s dense rainforests. British loggers settled in the area near the banks of the Mopan River to cut the valuable logwood.  As the demand for logwood decreased, the British set their eyes on the next prized hard wood – mahogany. The logs were floated downstream the rivers to Belize City where these were gathered and exported to England for the construction of exquisite train carriages and fine furniture.

Two centuries later, a sap from the chico zapote tree began to be exploited commercially, giving rise to the “chicle boom.” The harvest of the chicle quickly became the principal driver of the economy as an important industry in
the manufacturing of chewing gum. By 1878, Benque is described as “an Indian Village”, but it was not until 1904 that Benque was officially recognized as a town by the colonial government. Due to the invention of synthetic
chewing gum in the mid-1940s, the chicle industry essentially was wiped out. Since then, Benque has seen very little economic activity.

Over many decades, with the arrival of different people, a fusion of cultures gradually emerged. In the recent years Benque has been recognized as a center for culture, art and history and the Benque House of Culture (HOC) was created to raise awareness of the Mestizo and Maya culture and history. Today, Benque is a tranquil historic town of about 8,000, proud of their rich heritage and culture, “Benqueños” as the people of Benque are commonly called, share close cultural ties to its neighbor Guatemala and Mexico.
BENQUE VIEJO TOWN COUNCIL
Cor. George Str. /Park Lane, Benque Viejo Del Carmen
Cayo District, Belize, C .A.
(501) 803 2020